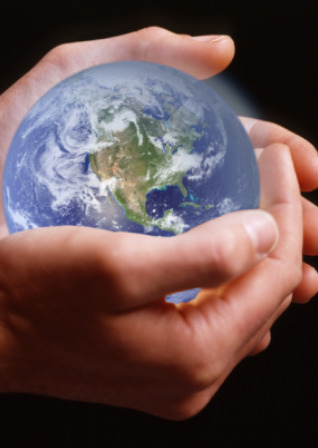 A group of scientists came together and thought that between them they were so smart that they no longer needed God. They had been able to clone just about anything, they had delved into the genetic code of all mankind, they had discovered the basic elements involved in the beginning of life. So they thought let's go tell God we don't need him anymore!

They went to God and said " God we don't need you anymore we can do everything with modern science that you've done"! God was rather amused and said "OK". But then with a smile on his face he said, "before you go I want to see how good you guys are, let's have a contest". "Let's see who can build the best human being possible". The scientists agreed! God went over and grabbed a handful of dirt. The scientists began to pick up some dirt and all of a sudden God said, "Hey, that's not fair, go get your own dirt"!

EVOLUTIONISTS have no real explaination for the origin of the universe! Not only are there many scientific evidences that the universe was not formed by the Big Bang, but the Big Bang theory atarts with all the energy and matter of the universe already in existence. Evolutionists say that they know that the universe was created by gases such as helium and hydrogen coming together! The problem is where did the helium and the hydrogen come from! This problem is called "The problem of the uncaused first cause". God is the uncaused first cause!

Dr. Crick, Nobel prize qinner and co-discoverer of DNA, calculated the odds of life forming on Earth and was forced to conclude by the evidence that life could never have arisen on Earth. He came up with the idea that life was transported to Earth by aliens rather than just believing in God (Man's problem is not in the mind but in the heart).

A FORMER EVOLUTIONIST Sir Fred Hoyle, likewise calculated the odds of life forming on Earth as being 1 in 10 to the power of 40,000. That is 1 in 10 followed by 40,000 zeros. I can fit 40 zeros on one line on this post. He further calculated the odds of life forming by chance even if every star had a planet capable of supporting life. His conclusion was that life could never have been formed on Earth or any other planet. Faced with the facts He abandoned his atheism and accepted that life could only come from a creator!

If you were to look at a painting on the wall of a museum would you assume that somehow that painting came to exist all by itself over a period of billions of years? No way! Why? Because of all the intricate design and order that convey meaning and symbolism and emotion! In the same way when one looks at creation and assumes that it somehow came to exist by itself from nothing over billions of years is not wise! Psalm 19:1 says " The heavens declare the glory of God; and the firmament(atmosphere) showeth his handiwork" Who put the cycles of nature in motion? This was not random chance happening! It's Art!..

Many people might say "What about the age of the earth it's billions of years old"?

The TRUTH is that all of the best and the majority of scientific evidences indicate that the earth is young, not old.

"There are hundreds of different 'clocks' by which we can estimate the age of a rock or the age of the earth, and almost all of them seem to give young ages for all of these things. There are about 5 or 6 however that seem to give old ages. It's interesting that my evolutionary colleagues will always choose to use the old ones" (John Morris Film, The Evolutionary Conspiracy)

Evidences of a Young Earth

1. Calculations based upon the rate of influx of helium into our atmosphere

2. The decay rate of the earth's magnetic field

4. The decay of the Earth's spin

Evidences for a Young Solar System

1. Calculations based upon the rate of sun shrinkage

5. The decay rate of Saturn's Rings

6. The decay of the moon's orbit

9. The increasing speed of cosmic dust

10. The decay of Galactic Clusters and Spiral Galaxies

Some might say "What about all the archaeological evidence in the fossils?"

The TRUTH is that there is no evidence for Evolution in the fossil record of the past. Evolutionists DO NOT have one real or proven example of evolution between any two species in the entire fossil record, NOT ONE!

Professor Louis T. More, a vocal evolutionist states "The more one studies paleontology (the fossil record), the more certain one becomes that evolution is based on FAITH alone." (The Dogma of Evolution, p.60).

"I fully agree with your comments on the lack of direct illustrations of evolutionary transitions in my book. If I knew of any, fossil or living, I would have included them… There are no transitional forms… There is not one such fossil for which one could make a water tight argument." (Darwin's Enigma: Fossils and Other Problems, p.89).

DARWIN HIMSELF STATED "NOT ONE CHANGE OF SPECIES INTO ANOTHER IS ON RECORD... WE CANNOT PROVE THAT A SINGLE SPECIES HAS CHANGED." (Darwin, My Life and Letters, Vol I, p. 210).

There are small changes within species. The fact that men may grow taller and that dogs grow more hair or Moths change color or that fruit flies grow 3 wings when genetically manipulated is much different (they are still a man, a dog, a moth, and a fruit fly) than stating that a starfish evolved into an elephant!

It is interesting to note that up until 1862 it had been considered scientific fact that frogs arose from stagnant water, worms from manure, mice from warm moist soil, insects from dew, and maggots from rotting meat! This now discredited and ridiculed theory was known as Spontaneous Generation. Darwin's theory of Evolution was born out of this laughable idea! Darwin's book was written in 1859 before spontaneous generation was disproved! In other words the theory of evolution was born out of a theory that today science is ashamed and laughs at!

Some Might Say "What about when a person walks down into a canyon and can see the layers of years stacked up on top of each other?"

This is known as the GEOLOGIC COLUMN. All of the best evidence indicates that the strata or layers of the so-called geologic column were laid down rapidly by a global flood not gradually over millions of years.

The trade secret of Geology is that the Geologic Column exists only in Theory! It exists no where in the real world! Evolutionists do not tell you and choose to ignore the fact that creatures from top to bottom of their evolutionary time table have been found in the same strata, indicating that trilobites, dinosaurs and man all lived simultaneously!

Hydrology experts rather than geologists should be our authorities in this field. These experts on the power and products of massive water movements tell us that hundreds of feet of layered strata is exactly what would be expected after a global flood. Anyone in any scientific field (If he/she is worth their salt), from Anthropology to Zoology would tell you that there has been a global flood whether they are an evolutionist or not!

First of all religion can teach us a lot about culture and people. Secondly, Evolution is just as much religion as Creation maybe even more so!

Note a few religions which are structured around evolutionary theories:

There are only three major groups that hold to Creation:

The INCREDIBLE HARM the THEORY of Evolution has caused Mankind in it's very short existence!

1. The original evolutionary theory was that the races evolved separately and that therefore certain races were further along the evolutionary progression than others. Darwin stated that the inferior lesser-evolved races would eventually be wiped out by the civilized ones! This idea was the basis of many ideologies that were born around the World including Karl Marx and Adolph Hitler! Hitler believed that Germans were the high species and used this reasoning to justify the killing of Jews to the Germans! 6 million estimated were killed brutally and horrifically! Not to even mention the deaths in WWII caused by this madman and the horrors of Communism perpetuated by Karl Marx and the human rights violations still being recorded by such ideology in countries such as China.

2. Emilia Dietrich the Mother of Evolution theory was responsible for some 10,000 bodies of dead Aborigines who were shipped to the British Museum in an attempt to prove they were the missing link!

3. The Smithsonian Institute in Washington D.C. holds the remains of 15,000 individuals of various races.

5. Eugenics is the main ideology of Planned Parenthood and most Abortionists and born out of the same evolutionary thought that some races are more advanced than others. Eugenics is the belief that it is important to bring about the improvement in the type of offspring produced! There are only 3 ways to do this

b. Keep inferior genetic codes(people) from having children.

The Question is what will you do when you are determined to be an inferior Genetic Code (person) and are not worthy of reproducing or maybe even living?

Psa 14:1 The fool hath said in his heart, [There is] no God. They are corrupt, they have done abominable works, [there is] none that doeth good.

Rom 1:16 For I am not ashamed of the gospel of Christ: for it is the power of God unto salvation to every one that believeth; to the Jew first, and also to the Greek.

Rom 1:17 For therein is the righteousness of God revealed from faith to faith: as it is written, The just shall live by faith.

Rom 1:19 Because that which may be known of God is manifest in them; for God hath shewed [it] unto them.

Rom 1:20 For the invisible things of him from the creation of the world are clearly seen, being understood by the things that are made, [even] his eternal power and Godhead; so that they are without excuse:

Rom 1:21 Because that, when they knew God, they glorified [him] not as God, neither were thankful; but became vain in their imaginations, and their foolish heart was darkened.

Rom 1:22 Professing themselves to be wise, they became fools,

Rom 1:23 And changed the glory of the uncorruptible God into an image made like to corruptible man, and to birds, and fourfooted beasts, and creeping things.

Rom 1:24 Wherefore God also gave them up to uncleanness through the lusts of their own hearts, to dishonour their own bodies between themselves:

Rom 1:25 Who changed the truth of God into a lie, and worshipped and served the creature more than the Creator, who is blessed for ever. Amen.