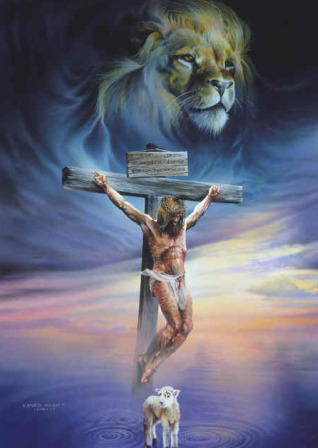 "But God commendeth his love toward us, in that, while we were yet sinners, Christ died for us." —Romans 5:8

I am saddened by the hatred that some professed “Christians” have for the unsaved. It is tragic. Yes, God hates sin and the wrath of God abides upon Christ-rejecters (John 3:36); but let us never stray from the great Biblical doctrine of God's wondrous love for mankind, which allowed Christ to be nailed to the cross for our sins. John 3:16, "For God so loved the world, that he gave his only begotten Son, that whosoever believeth in him should not perish, but have everlasting life." Notice the words, "God so loved THE WORLD."

Romans 5:8, "But God commendeth his love toward us, in that, while we were yet sinners, Christ died for us." God in His foreknowledge knew how sinful and rotten mankind would be, but He looked beyond our faults and saw our need for redemption. Jesus Christ died, was buried and rose again from the grave to TAKE AWAY our sins. Jesus did this by the shedding of His own physical blood. 1st Peter 1:18,19, "Forasmuch as ye know that ye were not redeemed with corruptible things, as silver and gold... But with the precious blood of Christ, as of a lamb without blemish and without spot." Christ died for all men, because God loves all mankind, even the vilest of sinful men.

I have received dozens of letters from professed “Christians” who are upset with me for my article God Loves People. One woman sent several internet links to me, linking to articles which teach that God doesn't love sinners. Oh, listen my friend, God loves mankind more than we could love Him in return. Luke 19:10 reads, "For the Son of man is come to seek and to save that which was lost." 1st John 3:16a, "Hereby perceive we the love of God, because He laid down his life for us." Notice the words, “the love of God.” God loves humanity, which is why He sent His Son to pay the debt for our sins. How could anyone say that God hates sinners? God DOES hate sin, and God IS angry with the wicked every day; but God equally loves each and every person and desires for them to repent and get saved. 2nd peter 3:9, "The Lord is not slack concerning his promise, as some men count slackness; but is longsuffering to us-ward, not willing that any should perish, but that all should come to repentance." God is “not willing that any should perish.”

When Moses went up to the top of Mount Sinai to beg God to forgive the sins of the Jews, God did. Exodus 32:14, "And the LORD repented of the evil which He thought to do unto His people." Unfortunately, the people were dancing naked around a calf committing idolatry before Moses even got back down to the camp. Then Moses got mad. Please notice that NO ONE died that day accept those who chose to. Exodus 32:26 reads, "Who is on the LORD's side? let him come unto me." The Jews who refused to come over to the Lord's side were killed that day (thousands of them). God didn't just kill them! It was their own sinful pride that got them killed. Pride is destructive! America's day of reckoning is coming, when her proud neck will be broken.

Yes, God does get angry about sin, very angry! In fact, Psalm 7:11 declares that "God is angry with the wicked every day." John 3:36 warns that the "wrath of God abideth" upon Christ-rejecters.

However, the entire Bible is based upon the FACT that God loves mankind, so much so that God the Father sent His only begotten Son into the world to suffer and die for our sins. Romans 5:8,9 reads, "But God commendeth His love toward us, in that, while we were yet sinners, Christ died for us. Much more then, being now justified by His blood, we shall be saved from wrath through Him." God proved His love toward mankind by sending His Son into this hostile, sin-cursed world and giving His life for our sins.

1st John 4:19 declares, "We love him, because He first loved us." The Bible teaches that God loved us before we loved Him. When we didn't love God, the Bible says that He still loved us. The truth is that God loved mankind before He ever spoke the universe into existence. Revelation 13:8 reads, "And all that dwell upon the earth shall worship Him, whose names are not written in the book of life of the Lamb slain from the foundation of the world." Jesus is the “Lamb of God,” Who in God's time (eternity) was slain before the foundation of the world (our time). Remember, we live in time but God lives in eternity where there is NO TIME (Revelation 10:6). In God's mind, Jesus had already died upon the cross before man ever became a living soul.

Romans 5:8 tells us, "But God commendeth His love toward us, in that, while we were yet sinners, Christ died for us." Jesus Christ laid down His life for us, knowing every sin which we would ever commit. The Bible declares that this is PROOF of God's love toward mankind. God commended (or revealed) His genuine love toward us by making a way of escape from the curse of the Law—a plan of redemption—a Savior to TAKE AWAY our sins. Jesus paid a debt that He did not owe, because we owed a debt that we could not pay.

Again, 1st John 4:19, "We love him, because He first loved us." Notice the words, "...because He first loved us." When people don't love God, they live in sin. Before we loved Him, we were still wicked sinners; yet the Bible says that God loved us and paid for our sins. The problem with the world isn't that God has stopped loving man; but that man has never started loving God. God loves sinners in spite of their lack of love for Him. God's love is unconditional.

God Has No Pleasure in the Death of the Wicked

No Christian who has God's love in their heart should be glad to see anyone go to Hell. Many people rejoice that sinners are burning in Hell, but God is not pleased about it. God does NOT want any soul to perish into Hell. 2nd Peter 3:9, "The Lord is not slack concerning his promise, as some men count slackness; but is longsuffering to us-ward, not willing that any should perish, but that all should come to repentance."

I realize that a believer is under grace and no longer under the curse of the Law, but to say that God hates the wicked is foolish and unbiblical. The great heart of God is much bigger than that. God loves mankind with an unconditional love that supercedes our words or actions. How shallow and immature for anyone to claim that God hates sinners.

There's a group of self-righteous people in our churches today, going around lying, telling lost sinners that they cannot be saved unless they give up their sinful lifestyle and stop sinning. Nothing could be further from the truth of God's Word. Who can stop sinning? Who can cease from committing sin? All that God requires is that a man acknowledge his guilt of sin and deserved penalty in hellfire, and believe on the Lord Jesus Christ to be forgiven. The change that genuine repentance brings is God's department. Our part is simply to BELIEVE.

As I mentioned earlier, I've had many people write me letters, upset because I say that "God loves people." They send me verses in the Bible where God opened the ground to devour people, or killed thousands of people in His anger. Although God certainly did execute judgment in many places in the Old Testament, it does not in any way diminish the fact that God loved those people who were destroyed. Christ died for those people.

In Luke 9:54-56, we find James and John eager to destroy the wicked with the wrath of God, but Jesus rebuked them instead, "And when his disciples James and John saw this, they said, Lord, wilt thou that we command fire to come down from heaven, and consume them, even as Elias did? But He turned, and rebuked them, and said, Ye know not what manner of spirit ye are of. For the Son of man is not come to destroy men's lives, but to save them. And they went to another village." And likewise I say to you professed Christians who insist that God hates sinners... "Ye know not what manner of spirit ye are of." In case you don't know, it is the spirit of Satan. Jesus came into this world to save sinners; not to hate them and destroy men's lives.

There are only two Scriptures in the New Testament where Jesus said "I hate" (Revelation 2:6 and 2:15). Revelation 2:6 states, "But this thou hast, that thou hatest the deeds of the Nicolaitans, which I also hate." And again in Revelation 2:15, "So hast thou also them that hold the doctrine of the Nicolaitans, which thing I hate." Jesus said that He hated the "deeds" of the Nicolaitans, and their "doctrine." Please notice that Jesus DIDN'T say He hated the Nicolaitans (a false cult). Jesus loves all sinners, not because they are sinners, but because they are people with souls whom He loves. John 3:16 tells us, "For God so loved the world, that he gave his only begotten Son, that whosoever believeth in him should not perish, but have everlasting life." The “world” includes EVERYBODY, even a dirty, rotten, vile sinner like me.

Yes, I do take an uncompromising stand on my website against all types of wickedness, heresies, and sins; but I will never stop proclaiming the Biblical truth that God loves ALL people (no matter what they have done). That's not to say that God approves of their wickedness, it just means that God unconditionally loves people.

Even after being nailed to a cross, Jesus expressed forgiveness to the Roman soldiers who had stripped him naked, beat Him beyond recognition, placed a sharp crown of thorns upon His head, mocked Him, spit on Him and then nailed Him to a cross to bleed and die (Luke 23:34). Don't you tell me that God doesn't love sinners! There is no depth of sin known to man which can prevent the arm of God from saving the sinner who seeks forgiveness, "Behold, the LORD's hand is not shortened, that it cannot save; neither his ear heavy, that it cannot hear: But your iniquities have separated between you and your God..."

What a tragedy that 95% of all the people in the world will one day burn in the Lake of Fire, forfeiting the free gift of eternal life which is already paid in full by Jesus' precious blood (1st Peter 1:18,19). Would you like to know for sure that if you died right now, that you would go to Heaven? You certainly can KNOW.